Following the introduction of the round 8/0 series of movements in 1935, Elgin introduced the 15/0 series of tonneau-shaped movements.  These were used in the thin, narrow watches popular in that era.  They look similar to Hamilton's 980/982, and Bulova's 7AP, and others. 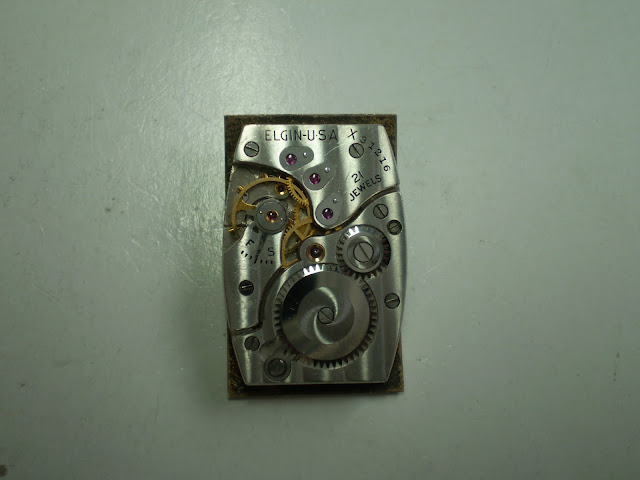 This is one I got in a lot of uncased movements.  It surprised me, because I'd never seen a 538 with this lovely straight line damaskeening.  Others I've seen all have the same flat satin finish that the other 15/0 Lord Elgins share.  It has an uncut, monometallic balance wheel and a white alloy hairspring, in contrast to the split, bimetallic balance and blue steel hairspring on the 531.  Unlike the 531, Elgin did not put the 20th and 21st jewels on the pallet, but rather capped the 3rd and 4th wheel upper pivots. Not exactly cosmetic and non-functional, but certainly not as functional as capping the pallet.

One of the most popular 15/0 Lord Elgin models is the one known as the 'Driver', though I've never seen it referred to that way in any Elgin ads. 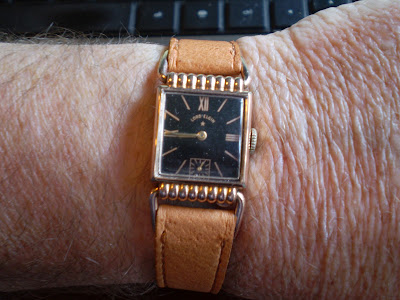 This model was made from 1939 through at least 1951, in yellow and rose gold, with black, white, and rose dial.  Often you'll see them with the strap under the loop lugs, but that's not how Elgin intended it.  This one's an early one, with a 538. 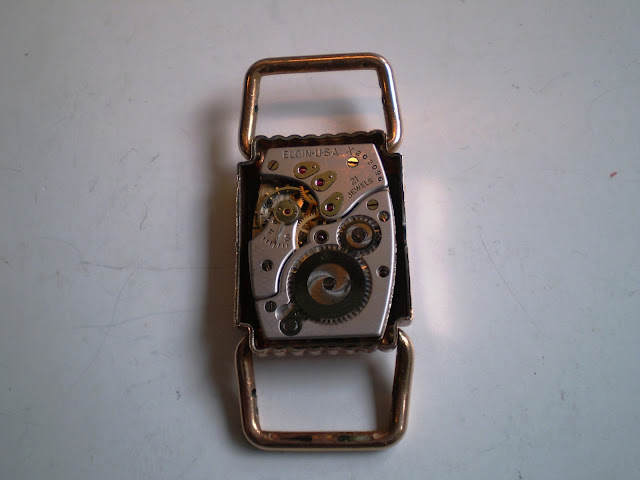 The 538 was superceded in 1940 by the 559. This is probably the most prevalent of the 15/0 Lord Elgins.  The case design dates to just before the war - I've seen ads for it from 1941, and even in 1942 - I guess either Elgin had excess inventory, or they still had some civilian production capacity. 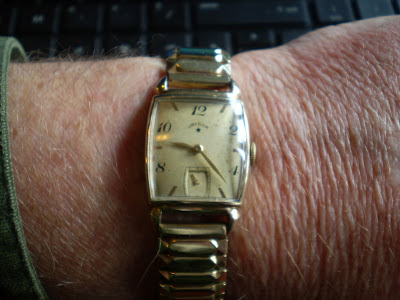 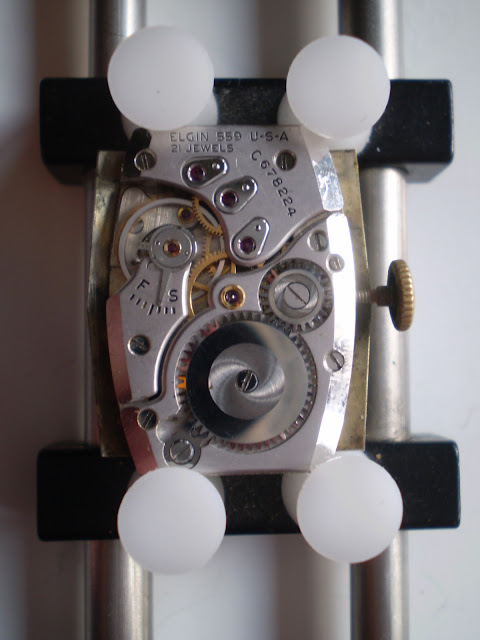 The 559 was produced until 1946, when it was replaced by the 626, at around the same time the Durabalance mainspring was introduced.   This model was introduced in the late 1940s.  The dial is an inaccurate re-print - the sub seconds dial is the giveaway. 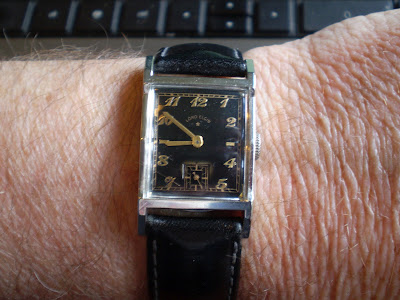 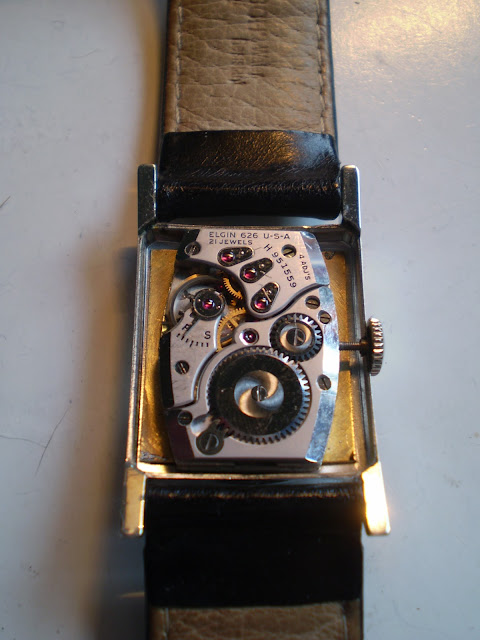 If you look at the cap jewels, you'll see that some previous worker had marked each of the cap jewel settings and the adjacent plate so that they could be returned to the same place.  This is stupid, because they're completely interchangeable! 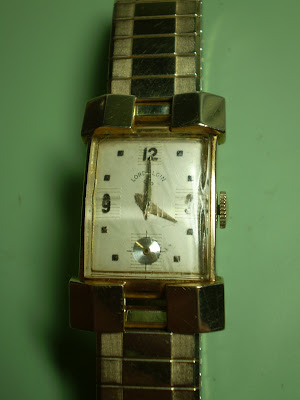 The 670 got rid of the cap jewels on the 3rd and 4th wheels, and put them on the pallet. 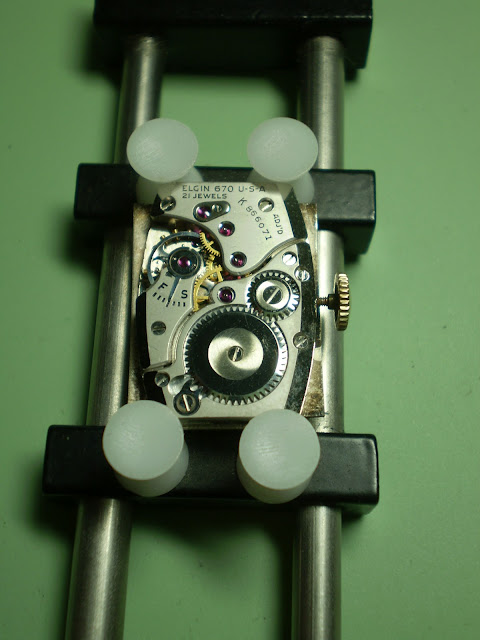 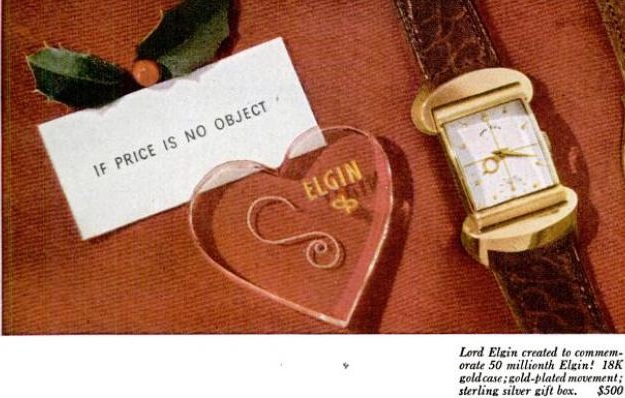 But I DID manage to get one of the movements, which had been stripped out of a case that probably went to the melter.  Whoever sold it probably got less from the melter than they'd have gotten from a collector, which makes me glad.

The movements were gold plated, and had a lovely diagonal damaskeening. 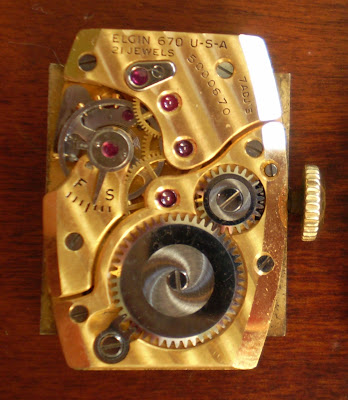 This one has a manufacturing mistake - they left off a 0, so the number is in the 5 Millions, not the 50 Millions. 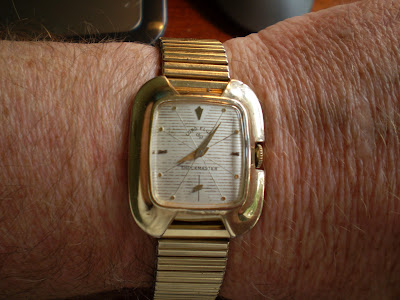 The shock protection on the 675, and the other 15/0 Shockmaster models, was a Kif Trior, rather than the Incabloc used on the 8/0s. 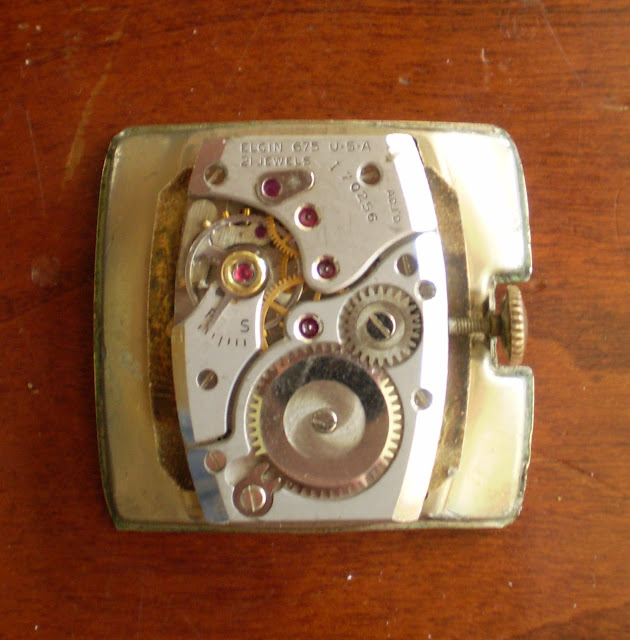